LG Display is going full steam ahead to bring flexible screens closer to reality. The proof of concept, showcased at this year’s Consumer Electronics Show (CES) in Las Vegas, had its first hands-on review by the BBC.

The screen has a 18-inch display and a resolution of 1,200 by 810 pixels, making it full HD, but the most important feature is the fact that it can be rolled up into a 3-centimeter (1.2-inch) radius cylinder without breaking the screen.

This amazing feature is possible thanks to the use of OLED technology, which stands for organic light-emitting diodes. While LEDs in an LED TV illuminate the LCD display, OLEDs are self-illuminating so they don’t need a rigid back panel to provide light.

Many believe that OLEDs represent the future of screens. Not needing a backlight, OLED screens can be significantly thinner than normal displays, and this quality makes OLEDs a desirable technology not only for TV screens but for mobile phones, tablets and wearable technology. 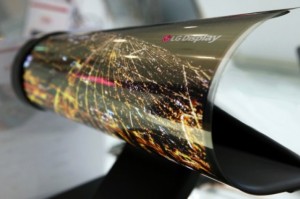 Producing these displays is still considerably more expensive than other screens, due to a relatively low yield of functional displays. LG Display claims that 80 percent of the produced OLED screen is functional, which is significantly lower than LED displays. A higher waste means a higher costs for the consumer, and it’s not surprising that OLED TVs are significantly more expensive.

The technology is not new; LG has been working on it for several years now, and the rollable screen was announced last year. But this CES will be the first time the screen has been shown to the public.

While the OLED technology allows bendable screens, they cannot be folded, so we are not yet at a futuristic video newspaper. And this is not the only limitation of the prototype. The screen can only be rolled up in one direction, which might not be a dramatic flaw but it does reduce the versatility of the display.

Another problem is that the pixels in the screen are easily damaged, becoming dead pixels. “There were several dead pixels on the screen and, after I played around with it a bit more, several more emerged,” Dave Lee reported for the BBC.

There is no indication when or if the technology will be commercially available. A new 55-inch prototype is being developed and it will reach a 4K resolution. “The larger prototype is expected in the near future. But as for a commercial product, we’re still planning the timing,” said KJ Kim, LG Display’s vice president of its marketing division, to the BBC.